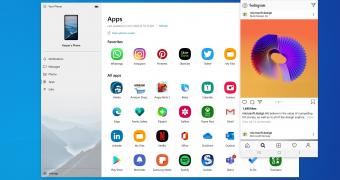 Microsoft has announced that support for Android apps on the Windows 10 desktop is now available for everybody running the operating system.

Announced earlier this year, this new feature is powered by Your Phone, the app that comes pre-loaded with Windows 10. However, worth knowing is that not all mobile devices are supported, and for the time being, you need a Samsung Galaxy Note20 for the whole thing.

The good news is that you no longer need to be an insider to be able to run Android apps on the desktop, as it’s enabled on production devices too.

“We are excited to announce that the Apps feature is now rolled out to everyone with supported devices (It may take up to 48hrs. to show up). It allows you to instantly access your Android phone’s mobile apps directly from your Windows 10 PC,” Microsoft says.

Android apps on the desktop

The Your Phone app allows users to run Android apps on the desktop in their very own windows, just like native appli… (read more)
Remember to like our facebook and our twitter @WindowsMode for a chance to win a free Surface Pro tablet every month!