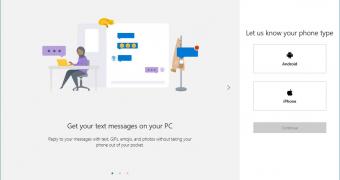 Microsoft has released Windows 10 build 18999 for Fast ring insiders, and this time the main highlight isn’t necessarily tied to the operating system itself, but to an application that testers can also install.

The Your Phone app now supports Calls, making it possible for Windows 10 users to answer incoming calls on their PC, make a call from a PC using the in-app dialer or the contact list, and even decline incoming calls from the PC with a custom text.

Your Phone has gradually evolved to become the main companion app for Android phones on Windows 10, and with this release, the app gets one of the most highly anticipated improvements since its debut.

Announced in August at Samsung’s Unpacked event when the South Koreans launched the Galaxy Note10, Calls in Your Phone require Android 7.0 and newer, Windows 10 19H1 or newer, and Bluetooth. You must be running at least build 18362.356 on your device.