Better Safe than Sorry: Users Not in a Hurry to Install Windows 10 Version 1809 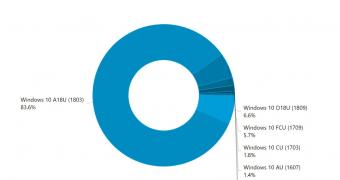 Microsoft’s Windows 10 October 2018 Update (version 1809) turned out to be the company’s buggiest Windows release in a long time, and this significantly affects its early adoption rates.

While this figure means it actually managed to double its share since the previous month, the current share indicates that users aren’t really in a hurry to install the update.

Windows 10 October 2018 Update was originally announced on October 2, but Microsoft pulled it only a few days later due to a critical bug leading to the removal of user files stored in libraries. The update was republished in November, and earlier this year it was released for all users as a manual download from Windows Update.