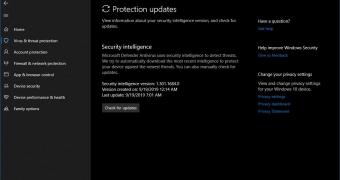 A recent update released by Microsoft for the Windows Defender engine earlier this week breaks down the manual scanning feature of the antivirus on Windows systems.

The update, which increases the engine version to 4.18.1908.7, was supposed to correct a System File Checker error that a previous update introduced as part of the July 2019 rollout.

The glitch originally caused a sfc /scannow check to incorrectly flag Windows Defender components as corrupted, and the update released this week was supposed to fully resolve this unexpected behavior.

But as reported by Gunter Born, the new update actually breaks down the manual scanning feature of Windows Defender, as the antivirus is no longer able to complete quick and full scans initiated by users. The automatic scans that Windows Defender performs regularly were not affected.