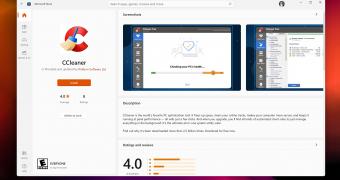 The Microsoft Store overhaul introduced with the debut of Windows 11 has been received with much enthusiasm by developers out there.

This is why in the last few months, several big app makers out there brought their apps to the Microsoft Store, especially as the company has updated its policies to make the store a better place for everybody.

The latest big name to join the Microsoft Store is none other than CCleaner, the very popular system cleaning solution that was once a must-have application for every Windows user.

CCleaner, on the other hand, has been struggling with various problems that convinced some users either to stop using it completely or just migrate to other similar apps on the market.

And in addition to the PUA warnings that showed up last year on Windows devices, with Windows Defender actually blocking the app entirely on the operating system, Microsoft itself played down such software for the typical Windows user.

Many years ago, shortly after … (read more)
Remember to like our facebook and our twitter @WindowsMode for a chance to win a free Surface Pro tablet every month!