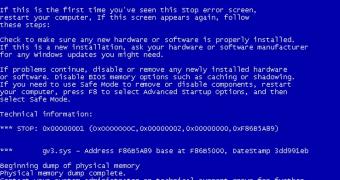 The infamous Blue Screen of Death is one of the worst things that can happen on a Windows computer because the computer needs to be restarted, possibly with some data loss, as some applications may not be able to save your work.

As most long-time Windows users certainly agree, BSODs aren’t something that we see as often as in the days of Windows XP or Windows 7, and the release of Windows 10 and Microsoft’s focus on reliability turned them into nothing more than occasional errors that aren’t so difficult to fix.

And yet, BSODs still happen every once in a while not only on Windows 10 preview builds (where they are actually called Green Screen of Death / GSOD) but also on stable versions of the operating system.

Most users try to fix these issues on their own, albeit in some lucky cases, a BSOD is just a rare thing that requires no input on the user side. This could be an indication that the BSOD was caused by a third-party driver or app that has in the meantime be… (read more)