Did You Know: Burger King Had a Windows 7 Whopper With 7 Stacked Beef Patties 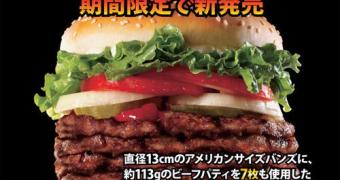 The debut of Windows 7 was quite a key moment in the history of Microsoft, especially since it launched after the Windows Vista disaster, so the company just had to make sure everything was flawless.

In addition to quite a launch party, Microsoft also worked with various companies across the world to celebrate the launch of Windows 7, including with fast food network Burger King.

In case you’re wondering what fast food had in common with technology, in general, and Windows 7, in particular, the answer comes down to the so-called Windows 7 Whopper.

Launched exclusively in Japan, the Burger King’s special whopper was a way to celebrate the debut of Windows 7, so it used not one, not two, not three (you get the point), but seven separate stacked beef patties. Obviously, the choice of seven patties isn’t a coincidence, as Burger King used this as a magic number for everything regarding this whooper.

For example, it was sold for ¥777 (a little over $8.50 at that time)… (read more)
Remember to like our facebook and our twitter @WindowsMode for a chance to win a free Surface Pro tablet every month!