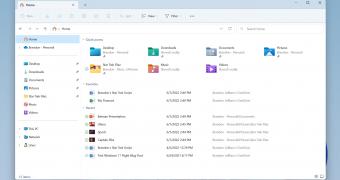 Let’s be honest about it, the support for tabs in File Explorer is one of the biggest updates for the file manager in a very long time.

This feature has long been a top request, especially on the modern versions of Windows, and Microsoft’s first attempt to respond to user feedback took place in 2018 with the introduction of Sets.

Powered by Microsoft Edge, Sets was essentially a concept that brought tabs all over the operating system, not just in Windows. However, this approach was eventually abandoned, with Microsoft promising to explore the ways to introduce tabs in File Explorer at a later time.

Earlier this year, Microsoft brought tabs in File Explorer as part of the Windows Insider program, but given this is such a major update, the company is obviously taking its time to make sure everything is working exactly as expected.

Now available for all Dev insiders

File Explorer tabs have therefore been rolling out exclusively to the Dev channel, … (read more)
Remember to like our facebook and our twitter @WindowsMode for a chance to win a free Surface Pro tablet every month!