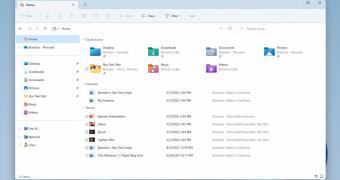 One of the biggest new features that Microsoft has announced lately is the support for tabs in File Explorer, the default file manager that’s been part of Windows for decades.

Given tab support is one of the most requested features in Windows, its arrival in Windows 11 is obviously good news, though for now, nobody knows for sure when the software giant could bring it to users.

But if a recent report is right, then the File Explorer tabs could go live as part of the Windows 11 version 22H2 feature update due later this year.

Previously available only for the Dev and Beta users enrolled in the Windows Insider program, the File Explorer tabs have quietly made their way to the Release Preview ring as well. A report from the German site Dr. Windows reveals that tabs are enabled in the latest Windows 11 preview build in the Relea… (read more)
Remember to like our facebook and our twitter @WindowsMode for a chance to win a free Surface Pro tablet every month!