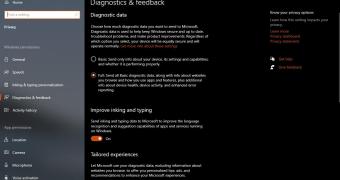 Telemetry services in Windows 10 have long been a controversial topic, as many accused Microsoft of spying on users and collecting too much information from devices running this operating system.

While Microsoft has further refined telemetry in Windows 10, the data collection process remained a big concern for some, including for privacy watchdogs who pressured the company for certain improvements that would provide users with more control over their data.

More recently, the Bayerischen Landesamts für Datenschutzaufsicht, which is the German watchdog regulating data protection in the country, found that disabling telemetry completely in Windows is something that can be done in version 1909 as long as the Enterprise and Education editions of the operating system is installed.

In-lab testing conducted by the agency determined that all telemetry services could be blocked, technically disabling Windows 1… (read more)
Remember to like our facebook and our twitter @WindowsMode for a chance to win a free Surface Pro tablet every month!