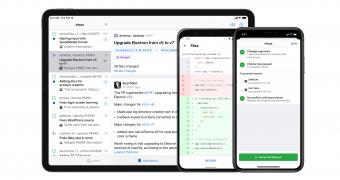 Microsoft-owned GitHub has just launched its mobile app for Android and iOS after the first beta landed on Apple’s platform back in November followed by a preview for Google users in January this year.

“Your response to the beta has been incredible—beta testers have commented on, reviewed, and merged nearly one hundred thousand pull requests in the last few weeks alone. And there’s been tens of thousands of team interactions since we first released the beta for download,” GitHub says.

It goes without saying that the GitHub mobile app was designed from the very beginning to enhance the task of process management, so it comes with features to “organize tasks in a swipe,” as the company itself explains.

You can access your inbox from the app and use gestures like swiping to finish a specific task or save a notification to deal with it at a later time.

Of course, you can also respond to comments, but also review and merge pull requests, all from the comfort of your s… (read more)
Remember to like our facebook and our twitter @WindowsMode for a chance to win a free Surface Pro tablet every month!