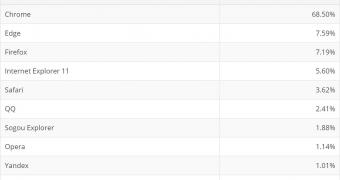 It was probably just a matter of time, but the thing so many people, including everyone at Microsoft, expected finally happened: Microsoft Edge surpassed Mozilla Firefox to become the world’s second most-used desktop browser.

Data provided by market analysis firm NetMarketShare reveals that the whole thing happened in March, when the adoption of the Chromium-powered Microsoft Edge improved to a level that allowed it to overtake Mozilla’s own browser.

So right now, Microsoft Edge is the second most-used desktop browser on the planet with a share of 7.59%, while Mozilla Firefox is now third with 7.19%.

As for who’s leading the pack, Google Chrome continues to be number one with a share of 68.50%.

The race to number one

While some expect Microsoft Edge to become the world’s top desktop browser, this is rather unlikely to happen anytime soon, especially given the difference versus Google Chrome at this point.

However, such a thing isn’t necessarily… (read more)
Remember to like our facebook and our twitter @WindowsMode for a chance to win a free Surface Pro tablet every month!