How to Enable the Dark Mode in Mozilla Firefox Settings UI 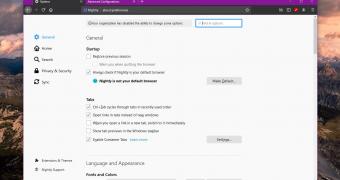 Dark modes are the new big thing in terms of software user interface, and pretty much every developer out there considers adding one to their apps.

Large companies like Google and Microsoft made a huge progress in this regard, so Windows 10, for example, comes with its very own dark mode to make the OS overall easier on the eye during the night.

Mozilla is one of the companies that are still working on refining the dark theme in their software, and Firefox is set to improve even more in the upcoming updates.

The most recent changes that the company made to the Nightly build shows that Mozilla is currently in the process of implementing a dark visual style for the about: pages, which, in essence, means that Firefox is set to get a dark mode in settings as well.

As with everything that’s being developed by Mozilla, the feature is currently part of Firefox Nightly, as all improvements are being tested here before they are released to everyone as part of the… (read more)