How Windows 10 Goes Passwordless in Version 2004 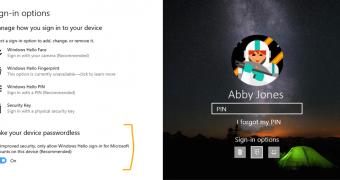 Windows 10 version 2004, or the May 2020 Update, is just around the corner, and for many this is the highly-anticipated release that they originally expected in the fall of 2019.

And this is because the previous update, officially known as Windows 10 November 2019 Update, didn’t come with anything else that small improvements here and there, as the focus wasn’t on new features, but on refinements under the hood.

So Windows 10 version 2004 is the one bringing so many changes, including some aimed at the passwordless experience in the operating system.

As many Microsoft watchers know already, the Redmond-based software giant is one of the biggest companies pushing for a world without passwords. And this is because Windows Hello, the company’s biometric authentication system, has already reached its maturity, so right now, it can be enabled on a pretty big number of devices out there.

One thing that’s worth mentioning every time we discuss Windows Hello in Windows 1… (read more)
Remember to like our facebook and our twitter @WindowsMode for a chance to win a free Surface Pro tablet every month!