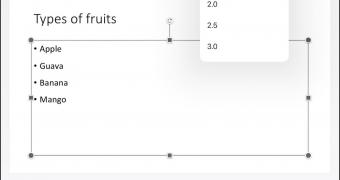 Microsoft has just announced a new feature for PowerPoint for iPad, and according to the company itself, it’s one of the most requested additions.

The software giant has therefore added line spacing to the feature arsenal of PowerPoint on Apple’s iPad, and just as expected, it comes with a series of options, including line spacing before and after paragraphs, within blocks of text, almost just like on desktop computers.

And similar to the desktop sibling, the line spacing feature is available via a dedicated button on the home tab in the ribbon.

“We heard you! The ability to set the line spacing on your slides exactly as you like it is a top user request for PowerPoint for iPad. You’re now able to customize the line spacing before and after paragraphs, within blocks of text, and more,” Microsoft announced.

“To change the line spacing on your slide, select the text and tap the … (read more)
Remember to like our facebook and our twitter @WindowsMode for a chance to win a free Surface Pro tablet every month!