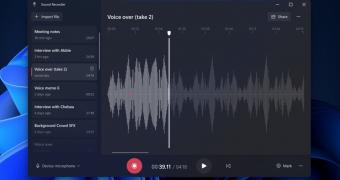 Microsoft has just announced a new Sound Recorder app for Windows 11 devices, with Windows Insiders enrolled in the Dev channel allowed to try it out right now.

Since the debut of Windows 11, Microsoft has been working non-stop on updating the inbox apps with a new look and feel that would align them with the rest of the operating system.

Snipping Tool, the new Media Player, the Clock, and so on, all are part of these efforts to make the modern experience feel more consistent across Windows 11.

And now it’s the turn of Sound Recorder, an app that hasn’t necessarily been the most popular tool in Windows but which deserves a modern overhaul of its own.

A preview of this new app is now available for users in the Dev channel of the Windows Insider program.

“You’ll notice that there is a beautiful new visualization for audio during recording and playback to complement the new look and feel of the app. We’ve also adde… (read more)
Remember to like our facebook and our twitter @WindowsMode for a chance to win a free Surface Pro tablet every month!