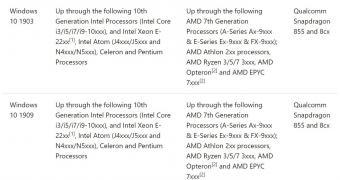 The very same list also concerns Windows 10 version 1903, or May 2019 Update, which debuted earlier this year, and comes with a series of changes.

Basically, Microsoft has added the latest Intel, Ryzen, and ARM processors, but at the same time, it also includes a rather weird mention of Snapdragon 855.

First and foremost, it’s worth noting that Windows 10 version 1909 works on Intel’s 10th Gen chips, and these include the Intel Core i3, i5, i7, and i9 variants that are already running on some PCs.