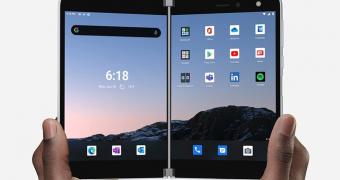 Better late than never, right? Microsoft has started the rollout of Android 11 to the original Surface Duo, obviously many months later than it originally planned.

Currently rolling out to the Duos out there, the update includes not only the new old Google operating system, but also the January 2022 security patches, as well as a series of new features specifically built by Microsoft for its dual-screen device.

For example, Microsoft says this update makes it possible for users to launch OneNote by clicking the top button on the Surface Slim Pen 2, obviously when the two are paired.

Furthermore, Microsoft says it now allows users to choose if they want to be able to answer phone calls when the device is folded and pick the apps that can span across both screens by default when they launch.

Microsoft says it has also added a series of other smaller refinements that will improve the overall experience with the Surface Duo.