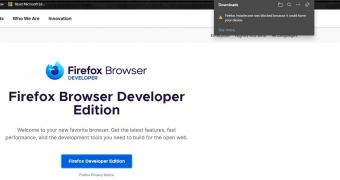 The browser world pretty much comes down to three giants right now, namely Google Chrome, which controls some 70 percent of the desktop, Microsoft Edge, already offered as the default Windows 10 browser but also offered on Linux and Mac, and Mozilla Firefox, which is seen by many as the only alternative to Chromium rivals.

So at some level, it’s not hard to figure out why Firefox diehard fans think of all kinds of malicious plots put together by Microsoft to fight against its browser rivals.

A recent error encountered when trying to download Firefox Nightly in Microsoft Edge made some redditors here believe the whole thing was intentional, even though it’s pretty clear that Smart Screen kicked and flagged the download as dangerous for totally different reasons.