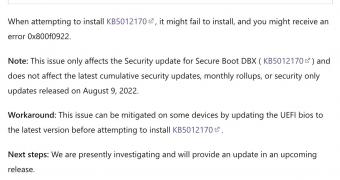 Microsoft has confirmed a new Windows Update problem, this time caused by a recent update shipped by the company to several Windows versions.

More specifically, Microsoft says the problems arise when trying to install update KB5012170, with the company explaining that users could end up getting error 0x800f0922.

According to the company, the following Windows versions are affected by the glitch:

While a full fix does not exist at this point, a workaround has already been discovered for the affected devices, though it’s not available for all users.

“When attempting to install KB5012170, it might fail to install, and you might receive an error 0x800f0922. Note: This issue only af… (read more)
Remember to like our facebook and our twitter @WindowsMode for a chance to win a free Surface Pro tablet every month!