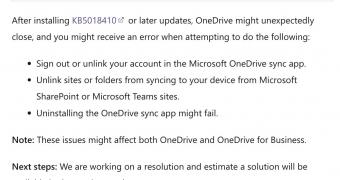 Windows cumulative update breaking down things in the operating system isn’t necessarily something uncommon, but in the last couple of years, Microsoft has managed to substantially reduce the likelihood of the whole thing happening.

However, occasional bugs still show up every once in a while, and this week, Microsoft confirmed a new Windows 10 glitch that is caused by the latest cumulative update.

This time, the software giant says that the one that’s being impacted is none other than OneDrive, as the app might close all of a sudden because of a bug in cumulative update KB5018410.

All Windows 10 versions getting this update are being impacted, including version 20H2, version 21H1, version 21H2, and version 22H2 (all share the same cumulative update).

According to Microsoft itself, the glitch affects both OneDrive and OneDrive for Business, and users could end up getting various errors, including one that informs OneDrive sync app cannot be installed.