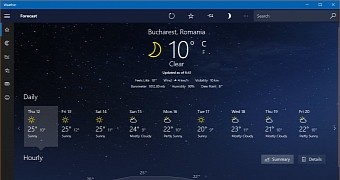 Microsoft has been very committed to offering Windows 10 with a pre-installed set of core apps for the essential activities that users typically perform every day, but as the company is reorganizing its business, plans for the future of Windows are also being updated.

As a result, one change that Windows 10 could undergo would be the retirement of some Windows 10 apps, with a report claiming that Microsoft is already winding down development of several included applications.

Thurrott writes that stocks and weather apps coming with Windows 10 could be the first victims, though there might be several other names on Microsoft’s blacklist, including Mail and Calendar. On the other hand, it’s not known if these could get the ax as well because they “have a higher priority because of their usage,” the report says.