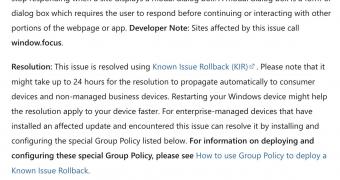 Microsoft has recently killed off Internet Explorer, telling users to switch to Microsoft Edge and the built-in IE mode if they still need to load a specific website in the old browser.

However, the IE mode feature wasn’t working exactly as expected for some new Microsoft Edge users, with even the software giant acknowledging that in some cases, it just stopped responding when a site displayed a modal dialog box.

On the other hand, not all devices were affected. Microsoft explained that it was all caused by cumulative update KB5014019.

“After installing KB5014019 and later updates, IE mode tabs in Microsoft Edge might stop responding when a site displays a modal dialog box. A modal dialog box is a form or dialog box which requires the user to respond before continuing or interacting with other portions of the webpage or app. Developer Note: Sites affected by this issue call window… (read more)
Remember to like our facebook and our twitter @WindowsMode for a chance to win a free Surface Pro tablet every month!