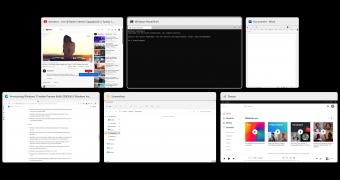 I don’t know about you, but Alt + Tab has become an essential Windows feature for me, so when I ended up with blurry windows in Windows 11, the whole thing has become quite a pain in the neck.

It’s not like I wasn’t able to use it anymore, but my Alt + Tab screen looked awful, which makes little sense for an operating system that’s supposed to be as modern as it gets.

But of course, given Windows 11 is still in its early days and is only available in the Windows Insider program, this makes perfect sense, and it was pretty clear Microsoft was supposed to fix the whole thing rather sooner than later.

And as it turns out, this was one of the first things Microsoft addressed as part of the Windows Insider program, as the most recent preview build of Windows 11 finally resolves the blurry windows in Alt + Tab.

As you can see in the screenshot here, everything is looking exactly as you’d expect it to look, so if your thumbna… (read more)
Remember to like our facebook and our twitter @WindowsMode for a chance to win a free Surface Pro tablet every month!