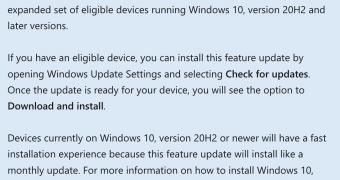 That was fast: Microsoft has recently announced that Windows 10 version 22H2, the most recent feature update for Windows 10, is ready for broad deployment.

While Windows 11 is getting all the love from Microsoft, Windows 10 continues to be the most popular version of the operating system currently available out there.

Devices that aren’t eligible to upgrade to Windows 11 can continue running Windows 10 until October 2025, at which point the operating system will officially reach the end of support.

As a result, Microsoft continues to support Windows 10 just like before the release of Windows 11, and the most recent feature update is the one known as version 22H2.

The software giant has recently announced that Windows 10 version 22H2 is ready for broad deployment, as this particular version entered the last phase of the rollout.

“The Windows 10, version 22H2 feature update is entering its final rollout phase and is now designated for broad deployment. As part of … (read more)