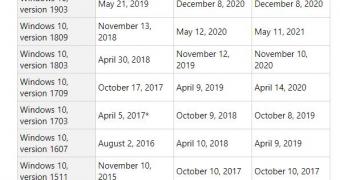 The October 2019 Patch Tuesday was the last update cycle for Windows 10 version 1703, or Creators Update.

As of today, no Windows 10 version 1703 SKU is supported, with only devices enrolled in the LTSC to continue being serviced moving forward.

Windows 10 Creators Update was released on April 5, 2017, while the Enterprise, Education, and IoT Enterprise editions received the go-ahead for production devices on April 7, 2017.

Microsoft stopped providing updates and security patches for computers running Home, Pro, and Pro for Workstations editions of Windows 10 version 1703 on October 9, 2018, while Enterprise and Education editions reached the end of service on October 8, 2019.

In other words, if your device is still on Windows 10 version 1703 and is not subscribed to LTSC, you’re strongly recommended to update as soon as soon as possible to a newer release of Windows 10, as Microsoft would no longer release any security patches and other fixes.