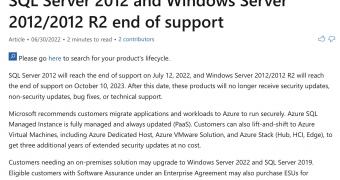 The company emphasizes that the end of support is an important milestone that requires customers to be prepared and either switch to Azure or go for newer versions of Windows Server, such as Windows Server 2022.

The software giant has also warned that SQL Server 2012 will also reach the end of the support this month, and the best way to avoid the security risks that are caused by the EOL is to upgrade to SQL Server 2019.