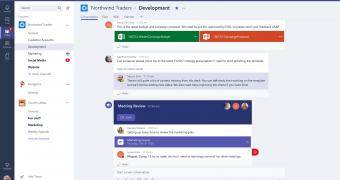 Microsoft has officially launched an ARM version of Microsoft Teams, as the company keeps betting big on the Windows 10 on ARM strategy that keeps expanding to more devices.

Not a long time ago, Microsoft announced the upgraded Surface Pro X, with the software giant therefore continuing its ARM push with a new device supposed to spearhead the hardware push in this market.

The ARM version of Microsoft Teams wasn’t announced with much fanfare though, and despite everybody knew it was coming, Bill Weidenborner, a Senior PM at Microsoft, published the download link as part of a post on LinkedIn.

“I’m really excited to announce that yesterday we launched our new native ARM64 Teams app for Windows 10 on ARM! If you are on a device that runs Windows 10 on ARM, you can go grab it here.
It took a real Teams team effort to make this happen. I’m reall… (read more)
Remember to like our facebook and our twitter @WindowsMode for a chance to win a free Surface Pro tablet every month!