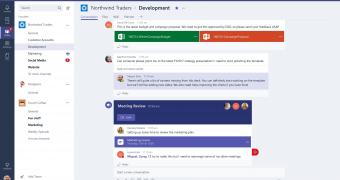 Microsoft has just announced that the language interpretation feature in Microsoft Teams has reached the general availability.

In other words, users who want to rely on a professional interpreter to translate the language used by a speaker to another language can do this in a much more convenient way.

The language interpretation support comes in handy particularly for users who want to listen to a meeting in a language they know, while also being able to collaborate in a meeting where multiple languages are being used.

“Our language interpretation feature will allow professional interpreters to convert the speaker’s message into another language without disrupting the speaker’s original flow or delivery. This simultaneous interpretation will lead to more inclusive meetings, where participants who speak different languages … (read more)
Remember to like our facebook and our twitter @WindowsMode for a chance to win a free Surface Pro tablet every month!