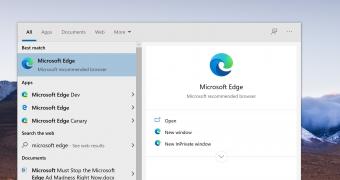 As many people know already, Microsoft has decided to rebuild its Windows browser using Chromium, the same engine that powers Google Chrome.

And while the transition from EdgeHTML has left many disappointed, including Mozilla, switching to Chromium was something that allowed Microsoft to turn Edge into a cross-platform browser expanding beyond the world of Windows.

So right now, Edge is available on Windows 7, Windows 8, Windows 8.1, Windows 10, and macOS, and a Linux version is also in the works. Technically, anyone running one of these operating systems can download the browser manually and install it on their devices.

On Windows 10, however, things are a little bit different.

The new Edge replaces the old Edge as the default browser on Windows 10. Therefore, Microsoft does allow users to manually install the browser, but at the same time, it also pushes it via Windows Update to those who don’t do it.

While for many this is considered a forced update, it’s not… (read more)
Remember to like our facebook and our twitter @WindowsMode for a chance to win a free Surface Pro tablet every month!