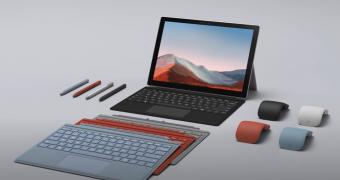 Everybody expected Microsoft to launch the Surface Pro 8 this month, and here’s the company indeed unveiling a new Surface model, only that it’s not the highly anticipated Pro 8.

The new device is called Surface Pro 7+ and is an upgraded version of the existing Pro 7.

The leaks that have been making the headlines in the last few months indicated the new Surface model would come with the same design as the Pro 7, and there’s no doubt plenty of customers were disappointing. Many expected the new Surface to come with smaller bezels, especially since it was supposed to be a new generation.

Microsoft, however, positions the Surface Pro 7+ as a hardware refresh, so while the design is pretty much the same as on the Pro 7, the magic happens under the hood.

The device is powered by Intel’s 11th-generation Tiger Lake chips, namely the Core i3-1115G4, Core i5-1135G7, and Core i7-1165G7. Microsoft is also adding 4G LTE support thanks to a … (read more)
Remember to like our facebook and our twitter @WindowsMode for a chance to win a free Surface Pro tablet every month!