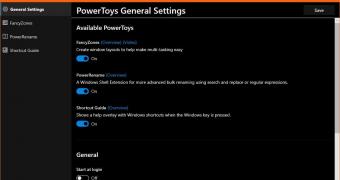 Microsoft has released a new version of PowerToys for Windows 10, with both FancyZones and PowerRename getting plenty of improvements.

First and foremost, PowerToys 0.14 refines the experience with FancyZones by polishing the behavior of certain features. For example, the app now comes with a setting to disable FancyZones for user-defined apps (and list of apps), and Microsoft says it corrected a bug causing it to steal the number keys.

There are also DPI scaling bug fixes, as well as improved app support, with Microsoft explaining that some issues in this regard still require improvements, as remote apps may still not work with FancyZones.

As far as PowerRename is concerned, the batch file renaming app included in PowerToys now allows the dialog to be resized, but Microsoft says that it needs to introduce further tweaks to the way DPI changes are handled. There are also settings to enable autocomplete and auto-suggestions, as well as to restore search and replace… (read more)
Remember to like our facebook and our twitter @WindowsMode for a chance to win a free Surface Pro tablet every month!