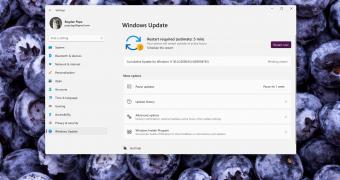 Microsoft has released the first update to the original Windows 11 preview build, and just like before, Windows insiders in the Dev channel are the ones who can download it.

Worth knowing is that Windows 11 preview build 22000.65 lands in the form of a cumulative update, and it takes just a couple of minutes to install given it’s mostly a pack of improvements. As you can see in the screenshot here, Windows 11 itself estimates the update would install in about 5 minutes.

There are plenty of improvements and fixes in this update, and while you can check out the full changelog in the box after the jump, it’s worth emphasizing the Start menu now features a search box, and File Explorer is getting several fixes for improved performance.

“We fixed an issue resulting in pinning and unpinning apps from Start not working, the command bar in File Explorer disappearing, and the snap layouts unexpectedly not appearing until rebooting your PC,” Microsoft explains in the change… (read more)
Remember to like our facebook and our twitter @WindowsMode for a chance to win a free Surface Pro tablet every month!