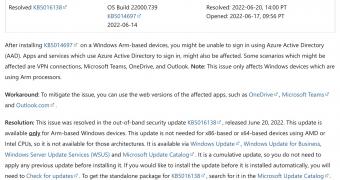 Microsoft has recently released a new Windows update, this time specifically aimed at Arm devices. The company says its purpose is to resolve an AAD sign-in issue.

Windows cumulative update KB5016138 is available for download on Windows 11 and the supported versions of Windows 10.

Microsoft says this update resolved a glitch that was previously caused by another cumulative update and which made it impossible to use apps like Microsoft Teams, OneDrive, and Outlook.

However, it’s important to note that only Arm devices were impacted.

“After installing KB5014697 on a Windows Arm-based devices, you might be unable to sign in using Azure Active Directory (AAD). Apps and services which use Azure Active Directory to sign in, might also be affected. Some scenarios which might be affected are VPN connections, Microsoft Teams, OneDrive, and Outlook. Note: This issue only affects Windows devices which are using Arm processors,” Microsoft <a href="https://docs.microsoft.com/… (read more)
Remember to like our facebook and our twitter @WindowsMode for a chance to win a free Surface Pro tablet every month!