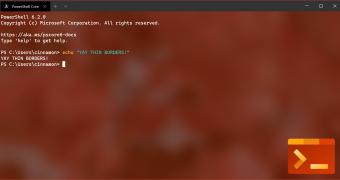 Microsoft has released a new version of Windows Terminal, and the changelog includes plenty of new features.

Now at version 0.7, Windows Terminal also includes pane support, which means that you can split the Terminal window into multiple panes. However, at this point only the default profile is supported, but Microsoft says that it’s working on adding support for opening other profiles in a pane in a future update.

Then, this update also introduces tab reordering, but once again, this feature comes with its own limitations. Due to a bug, tab reordering does not work with administrator rights (when running Terminal as administrator), and the app crashes when you attempt to use this feature. Microsoft says the UI of the tab also disappears occasionally when reordering, but fixes are already on the way.

There’s a new option that allows users to suppress the application title when using Windows Terminal.

“You can now suppr… (read more)