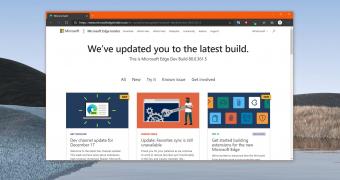 Microsoft has released a new Microsoft Edge Dev build, and this time it’s a notable update not only thanks to the improvements that it brings, but also because it’s the final build for major version 80.

In other words, this is a release candidate for the Beta channel, and depending on stability and reliability data, it could be graduated to Beta in the coming days. Microsoft says no other Dev build is expected until January.

Microsoft confirms it’s working on a pinning wizard, a feature that will make it easier for users to pin their favorite websites to the taskbar.

“It will occasionally pop up from your Task Bar and suggest top websites from your history to pin directly to the Task Bar as installed websites.  It can also be used at any time from … > More tools,” the company explains.

Additionally, Edge is also getting support for high-contrast themes… (read more)
Remember to like our facebook and our twitter @WindowsMode for a chance to win a free Surface Pro tablet every month!