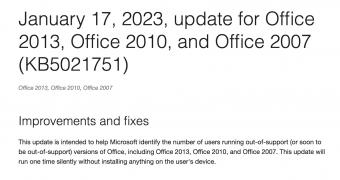 Microsoft has recently released a new update whose purpose is rather unusual this time: the company will use it to look for expired Office installations on Windows devices.

The new update, which is labeled as KB5021751, showed up earlier this week, and the folks over at the German site Deskmodder claim they received it on Windows 11. While Microsoft doesn’t provide such information, it looks like the same update is also released to Windows 10 devices, and given its purpose, this makes perfect sense.

Microsoft is pushing the update to all supported versions of Windows (currently only Windows 10 and Windows 11 continue to be serviced), so the company can accurately determine the Office installations that are available on the devices running the two operating systems.

Office 2013 approaching the end of support

According to the… (read more)