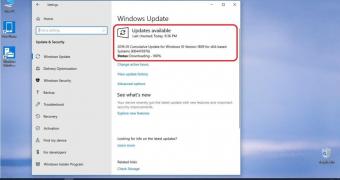 Microsoft has released a new cumulative update for Windows 10, but this time the company’s target isn’t the production version of the operating system.

Windows 10 cumulative update KB4476976 is now available for download for devices running preview builds as part of the Release Preview ring, and it increases the OS build number to 17763.288.

What’s very important to note is that Release Preview insiders are still on Windows 10 October 2018 Update (version 1809), so this cumulative update could actually be an early version of a later release that may become available to everyone in mid-January.

Windows 10 version 1809 was originally released on October 2, but a few days later, Microsoft pulled it completely after discovering a bug potentially leading to the removal of user files. The software giant then re-released the update to users in the Slow and Release Preview rings for further testing.