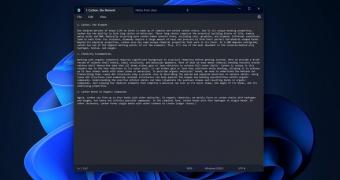 Tabs seem to be the next big thing in Windows, and after bringing them to File Explorer, Microsoft is now shipping the same update to Notepad as well.

While this could sound unbelievable to some people, Notepad remains an app that so many Windows users love. It comes in handy for all kinds of things, including basic stuff like simply keeping a note of things you don’t want to write on a piece of paper to complex work like coding.

And because Notepad is such an essential part of the Windows experience, Microsoft decided to update its feature arsenal with support for tabs.

First spotted in late December, tabs in Notepad are now going live for users who are enrolled in the Dev channel of the Windows Insider program.

And of course, they work just like you’d expect them to work, as they allow users to run multiple instances of the app in the same window.

“With this update, we are introducing support for multiple tabs—a top requested feature from the community—where y… (