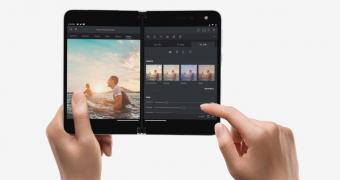 Microsoft launched the Surface Duo dual-screen Android device earlier this year in the United States exclusively, and now rumor has it the company is working not only to bring the phone to more countries but also to release a new color.

Leaker @cozyplanes revealed on Twitter that one of the biggest releases on the Microsoft front is the debut of a black Surface Duo, and although we still don’t know exactly when this new model is supposed to go live, it’s reportedly expected to happen “soon.”

Interestingly enough, Microsoft is already looking into the international launch of this smartphone, and this could be an indication that both the Glacier and the Black Surface Duo could eventually land in the hands of more people outside the United States.

The bad news is the black Surface Duo would come with the same specs as the Glacier sibling, which means it’ll still be powered by the same outdated Sn… (read more)
Remember to like our facebook and our twitter @WindowsMode for a chance to win a free Surface Pro tablet every month!