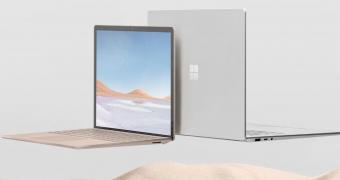 Microsoft is expected to announce a new Surface event on September 30, and according to people familiar with the matter, the company could take the wraps off at least two new devices.

One of them is an improved Surface Pro X, presumably called Surface Pro X 2, that would come with upgraded species, including a new chip that could possibly include 5G capabilities.

The second device is a smaller Surface Laptop that could feature a 12.5-inch display, and leaker @cozyplanes claims this new product is going to be called Surface Swift.

While no specifics have been provided on its specs, it’s believed Microsoft Surface Swift could go on sale in the United States in October, but the international launch could be pushed back for a few months. In other words, those living in Europe, for example, won’t be able to get their hands on the Surface Swift until … (read more)
Remember to like our facebook and our twitter @WindowsMode for a chance to win a free Surface Pro tablet every month!