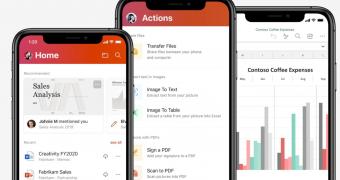 Microsoft Office remains one big cash cow for the Redmond-based software giant, so it goes without saying the company wants to improve this product as much as possible on all platforms where it’s available.

And the reason is as simple as it could be: the better everything works, the bigger number of paying customers, so it makes sense for Microsoft to improve Office not only on Windows but also on rival platforms like macOS.

This week it was the turn of the iOS version of Office to get an important improvement. More specifically, Microsoft has updated its Office apps with support for a mouse on iPad, which means Apple users can now be even more productive when using Microsoft’s productivity suite.

The feature was actually announced last year, so it definitely took a while for the software firm to make it available for everybody in the Apple ecosystem. The company hasn’t released any statement regarding the new updat… (read more)
Remember to like our facebook and our twitter @WindowsMode for a chance to win a free Surface Pro tablet every month!