Microsoft Wants More Blur in Windows 11, and Users Are Going to Love This 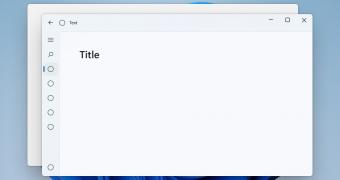 Microsoft is believed to be working on a new version of the blur effect currently available in Windows 11, and this could eventually land as an improved flavor of Mica.

Spotted by StartIsBack (via WL), the new visual effect is obviously based on Mica, though right now, it appears to be called Tabbed.

At first glance, it’s just a darker version of Mica, but at the same time, it could be refined even further in order to provide users with some extra polishing across the operating system.

Of course, Microsoft has so far remained tight-lipped on this update, so for the time being, nobody knows exactly if and when it’s supposed to show up in the Windows Insider preview builds.

No word regarding the launch date

Microsoft is projected to launch the first Wind… (read more)
Remember to like our facebook and our twitter @WindowsMode for a chance to win a free Surface Pro tablet every month!