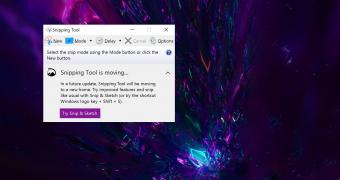 The classic Windows Paint app showed up in the Microsoft Store earlier this week, and now Microsoft has confirmed that it doesn’t come alone.

In addition to MSPaint, the Snipping Tool is also making its way to the Microsoft Store, a change that would allow the software giant to update both apps without relying on Windows Update.

The Snipping Tool was originally supposed to be retired and replaced by Snip & Sketch, but now that it’s published in the Microsoft Store, the two can be serviced together in a more efficient way.

“MSPaint is now updateable via the Microsoft Store outside major OS updates. It also has a new icon and has been promoted out of the Windows Accessories folder to its own place in the Start menu,” Microsoft says.

“Snipping Tool is now updateable via the Microsoft Store outside major OS updates. It has been packaged together with … (read more)
Remember to like our facebook and our twitter @WindowsMode for a chance to win a free Surface Pro tablet every month!