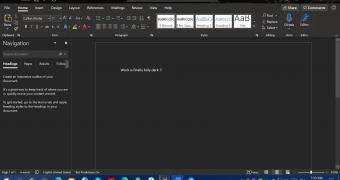 Let’s admit it, dark modes are the new cool, and Microsoft knows it very well. This is the reason the software giant has already added a dark theme to Windows 10, and now the company is working around the clock on adding similar updates to its other software products out there.

The next in the queue to get a dark mode is none other than Microsoft Word, with Twitter user Florian B. already spotting such a visual style update that’s available for select insiders.

Microsoft itself has remained completely tight-lipped on this update, though judging from the screenshot posted on Twitter, the new dark mode would cover the entire UI of the app, with the font itself turning to white.

Worth emphasizing is that this feature would only be available for the desktop version of Microsoft Word, though eventually, Microsoft wants to bring the same visual style on all platforms for a little bit more consistency.
… (read more)
Remember to like our facebook and our twitter @WindowsMode for a chance to win a free Surface Pro tablet every month!