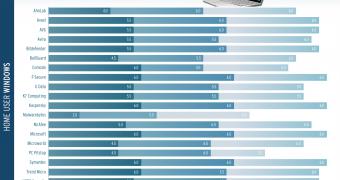 Windows Defender is now one of the leading antivirus products worldwide, according to a research conducted by the security researchers over at German institute AV-TEST.

Microsoft isn’t a security vendor whose primary objective is to build advanced software solutions to block malware and cyberattacks, but thanks to all the efforts the company has put into Windows Defender lately, the built-in Windows 10 antivirus has made a major step towards becoming such a product.

And the latest antivirus tests performed by AV-TEST indicate that Windows Defender now offers performance similar to what you get from leading security vendors like Kaspersky and Symantec.

Specifically, Windows Defender was rewarded with a final score of 18 points in the antivirus tests, after receiving the maximum of six points for individual tests evaluating the protection, performance, and usability of the product.