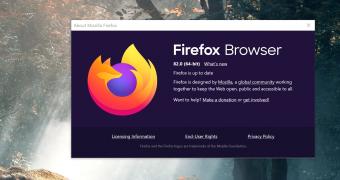 If Chromium-powered browsers aren’t necessarily your cup of tea, Mozilla Firefox is pretty much the only worthy choice that you have right now.

Currently the third most-used desktop browser out there, after Google Chrome and Microsoft Edge, Mozilla Firefox receives major updates every four weeks, all as part of a new release calendar that was adopted by Mozilla earlier this year.

Previously, major Firefox updates were published every six weeks, so without a doubt, this accelerated release cadence is good news for users. And it’s all because we get to try out new features faster, all without the need for downloading the beta builds of Firefox.

Earlier this week, Mozilla rolled out Firefox 82, and one of the most notable changes in this version concerns the actual performance of the application. Needless to say, this is something that really helps Firefox in the fight against Chromium browsers, especially because users are always looking for the fastest and most sec… (read more)
Remember to like our facebook and our twitter @WindowsMode for a chance to win a free Surface Pro tablet every month!