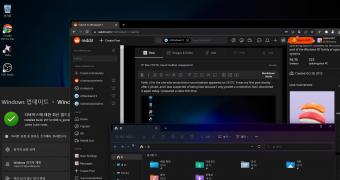 The taskbar has received a major overhaul with the release of Windows 11, as Microsoft has placed all icons at the center of the screen, so they’re no longer aligned to the left.

The overhaul of the taskbar, however, is a work-in-progress, with the software giant working on further polishing, such as the drag and drop support, that further enhance the experience on the desktop.

But as it turns out, there’s something really big coming to the taskbar in a future Windows 11 update. Or at least, that’s what seems to be the case at first glance, so don’t be too surprised if this is just the Internet being, well, the Internet.

Someone on reddit claims the most recent preview build shipped as part of the Dev channel in the Windows insider has a glitch that enables a rounded taskbar. It’s easy to believe this is a graphics bug in Windows, but according to the use… (read more)
Remember to like our facebook and our twitter @WindowsMode for a chance to win a free Surface Pro tablet every month!