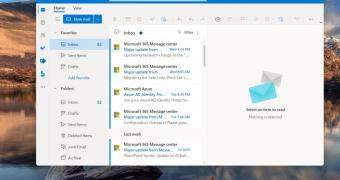 We’ve known for a while that Microsoft was working on a new Outlook app whose role was to replace the existing email client in Windows, and as it turns out, its launch may not be too far.

An early version of the app has recently leaked, providing us with a look at how the new Outlook is going to work when it gets the go-ahead. Some users have also been able to activate the app and set up their accounts, it seems.

The new Outlook app is essentially a web-based version of an email client that would eventually replace the default Windows mail app.

Microsoft has been working on the transition to PWAs for quite some time, and based on the screenshots that made the headlines lately, this new Outlook app appears to continue this strategy.

According to a report from The Verge, Microsoft is expected to announc… (read more)
Remember to like our facebook and our twitter @WindowsMode for a chance to win a free Surface Pro tablet every month!