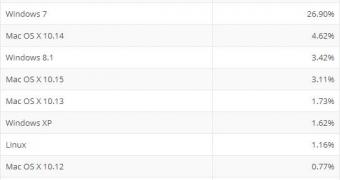 Microsoft is set to discontinue Windows 7 on January 14, and with just one month and a half left on the clock, you’d expect the majority of users to already be on their way to Windows 10.

But according to new data provided by NetMarketShare for the month of October, that’s really not how things are going for the 2009 operating system, as the market share of Windows 7 barely declined last month.

And what’s even worse for Microsoft is that Windows 10 itself recorded a slight drop at a time when it’s supposed to benefit from the approaching end-of-support of Windows 7.

More specifically, Windows 10 remained the number one desktop operating system, but declined from 54.30% to 53.33%. Windows 7 was still the runner-up, only that its collapse happens much slower than Microsoft expected, so its market share fell from 26.94% in October to 26.86% in November.